A Dazzling Night of Networking at CoMotion

December 15, 2016 by Chris Sanislo in Coworking in Hamilton, Uncategorized 0

My coworking adventure took me to some new, uncharted territory – my first HamOnt networking event. The Holiday Razzle Dazzle, hosted by Hamilton HIVE and The CoMotion Group, had all the festive fun you could want and a lot more inspiration than I expected.

It was the musical guest that kicked it off. It was the crowd that went from nil to packed in a matter of about 15 minutes. It was the local brews from Collective Arts at the bar. It was the unbelievably delicious food. 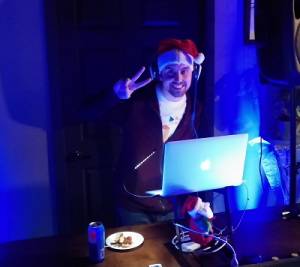 But this night, for me, was about the people.

Given this was my first HamOnt networking-type event, you could call me a bit of a rook. However, I’m no stranger to similar style events and parties within the ad industry. But this was such a diverse group of people. People from all kinds of business backgrounds – from those who are the brains behind an operation, to those working for the brains behind the operation, to people in businesses who support other business – and a smattering of freelancers like me. 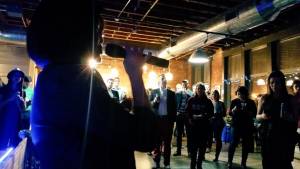 Despite the diverse crew, there was one key commonality I found – enthusiasm for Hamilton. It was hard to find a conversation that didn’t, at some point, talk about our city’s resurgence. Sure, I was an active part of a handful of them and, undoubtedly, helped steer things in that direction. But, I wasn’t the only one who noticed. It was enough to generate a pretty funny quip of “I think the downtown renaissance is fueled by conversations about the downtown renaissance.” And it was agreed that sharing the story is certainly part of start-ups proliferating in the heart of the city. These were inspiring conversations. As a Hamiltonian, it was inspiring to see the transformation live and in-person, and even more inspiring to be a part of it. 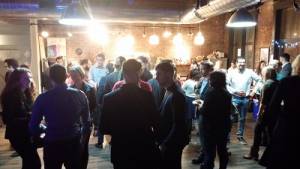 s also amazing to see how tight-knit the community is. Despite the range of individuals, so many conversations included at least one “oh, yeah, I know them”. And not in a “cliquey” sense. If you didn’t know anyone before, you sure do now. And you’re in the network. It was that simple and that welcoming. Maybe that’s simply within the DNA of Hamilton. Some of the honest, genuine blue-collar roots showing up in our young professionals – rejecting pretentiousness in favour of inclusion. Because sharing a few stories over a hometown brew with anyone is a recipe for a good time.